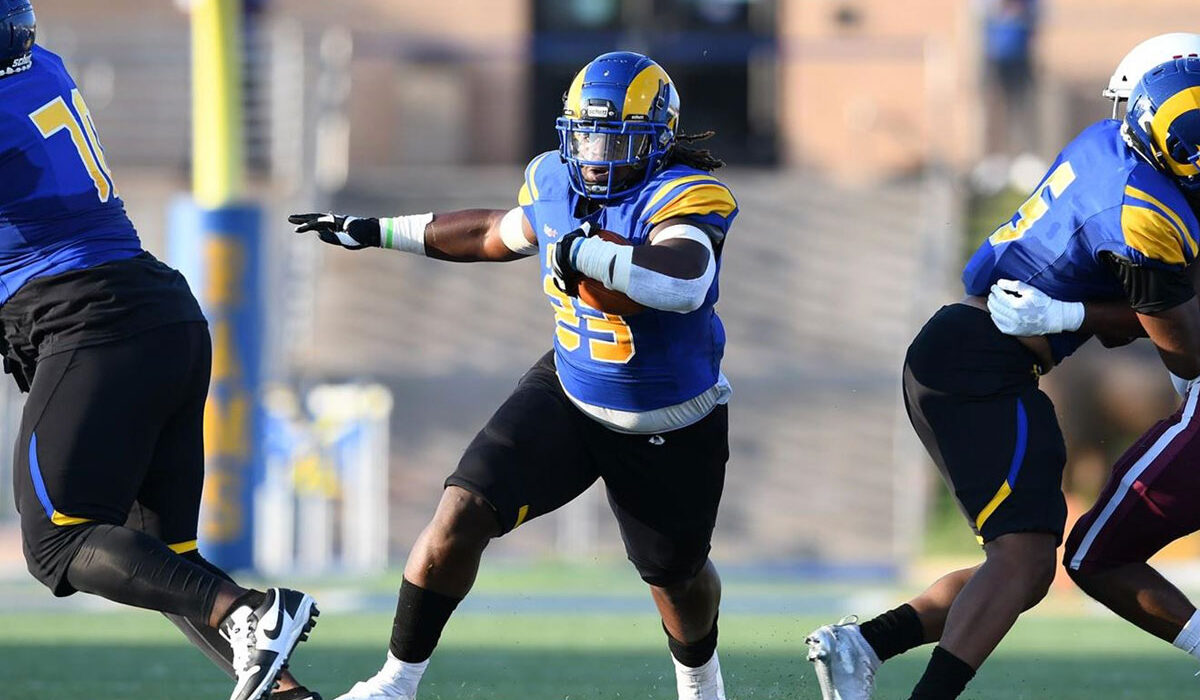 ST. CHARLES, Mo. – The Angelo State football team strung together an offensive showcase to open the 2021 season, defeating 21st-ranked Lindenwood 40-20 on the road on Thursday night.

The Rams improve to 1-0 to start the season for the fifth consecutive time, winning the opening game of the year since the 2017 campaign.

Just under six minutes into the contest, the Rams scored their first points of the night on defense as Donavyn Jackson tackles a Lion’s rusher for a three-yard loss and a safety to go up 2-0.

In the third drive of the game, the Rams earned the first touchdown of the season as a 69-yard pass from Zach Bronkhorst to Zorhan Rideaux set up a two-yard touchdown run for Nathaniel Omayebu III to go up 9-0.

The Rams added to their lead moments later, once again scoring on the defensive side of the ball as Andrew Pitts intercepted Lindenwood’s Cade Brister for a 26-yard pick six to go up 16-0.

Lindenwood scored their first points in the closing minutes of the first quarter, connecting on a 35-yard touchdown pass to cut the lead to nine points for ASU.

With just over six minutes to play in the first half, ASU’s CJ Odom broke away for a 20-yard gain, just inside LU’s 10-yard line, setting up another touchdown run from Omayebu, this time from eight yards out.

Odom finished with 127 rushing yards on the night to lead the Rams while Omayebu collected 64 yards and two scores off 18 attempts.

The Lions once again found a score in the closing minutes of the quarter as Lindenwood went into halftime down 23-14 after a 24-yard touchdown pass with seven seconds remaining gave them their second score of the night.

Angelo State finished the game with 460 yards of offense while holding the Lions to 267 yards including only 29 yards on the ground.

Odom got things going for the Rams in the second half, rushing out to another score with a 46-yard run for his longest of the day, giving ASU a 30-14 advantage.

Towards the end of the third quarter, Bronkhorst connected with Rideaux again, this time for seven yards and a touchdown to make it a three-possession game at 37-14.

Rideaux led the Rams’ receiving core with 86 yards from catches as a touchdown while Kellen Pachot finished with five receptions for 85 yards and Noah Massey collected 31 yards and three catches. Bronkhorst ended the game 19-of-33 with a touchdown and interception and 274 yards.

The Lions scored their final touchdown of the night on a two-yard run by the quarterback but couldn’t overcome the early push by the Rams.

With the game wrapped up, Asa Fuller scored the final points, hitting a 27-yard field goal to close out the game.

The Rams will remain on the road next week as they travel to Chadron State on Saturday, Sept. 11, before opening their home and Lone Star Conference schedule on Sept. 18 against Midwestern State.