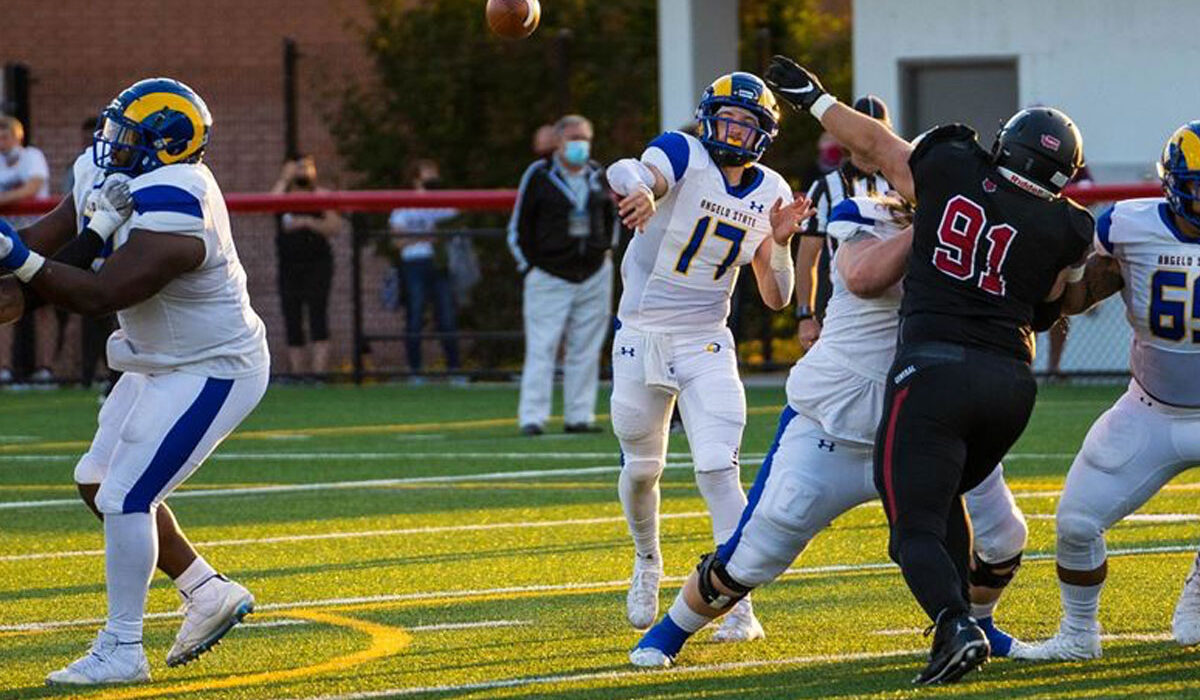 ELLENSBURG, Wash. – The Angelo State football team overcame adversity on the road, climbing back late against Central Washington to defeat the Wildcats 14-9 with a last-minute touchdown on Saturday night in Tomlinson Stadium.

With the win, the Rams improve to 3-1 overall on the season while Central Washington drops to 2-2.

Down 9-7, Nathaniel Omayebu III collected the ball one yard out of the end zone before pushing his way through for a score to take the lead with 48 seconds remaining in the ball game.

Angelo State’s defense controlled the game throughout the night, holding the Wildcats out of the end zone while allowing only 202 total yards off offense including 88 yards on the ground. The Rams have yet to give up a 100-yards rushing in their first four games of the season.

After a scoreless first quarter of play, the Wildcats got on the board first, hitting a 21-yard field goal to go up 3-0 after the Rams held CWU on a goal-line stand.

Late in the second quarter, the Rams drove 55 yards on nine plays to score their first touchdown of the night as Austin Landry took a direct snap before running five yards to give the Rams their first lead of the night.

Omayebu led the Rams rushing on the night, collecting 100 yards off 24 attempts with a score. Kason Phillips shared the load in his second game for ASU, rushing for 36 yards while Landry finished with 13 yards and a touchdown.

The Rams stepped up again on defense in the third quarter, forcing three straight incompletions to inside the 12-yard line as the Wildcats kicked another field goal to make it a one-point game.

In his first ASU start, Hagen Garvin finished with nine completions for 130 yards with no interceptions while Landry finished with a team-high 38 receiving yards off two catches. Kellen Pachot added three catches for 35 yards and Phillips added 23 yards receiving.

The Wildcats took the lead with their third field goal of the game, hitting a 40-yard field goal to start the fourth quarter of play.

In ASU’s final drive of the night, Garvin completed a 14-yard pass to Rasheen Green before connecting on a 31-yard pass to Pachot at Central Washington’s two-yard line to set up the game-winning score.

Central Washington threw a final hail marry attempt that was picked off by ASU’s Andrew Pitts to close out the game.

The Rams will return home next weekend as they welcome in Western New Mexico for a Lone Star Conference matchup on Saturday, Oct. 2 at LeGrand Stadium at 1st Community Credit Union Field.