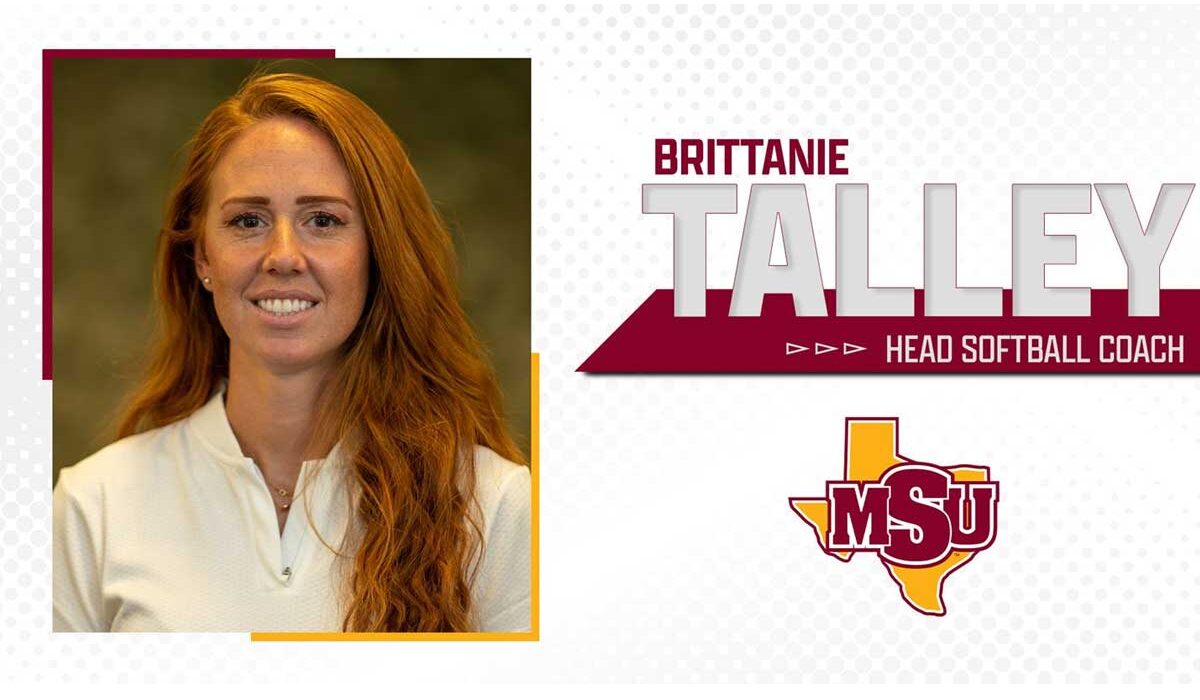 “Brittanie brings with her a commonality of expectations between the athletic department and her athletes as well as a shared vision that MSU Softball deserves,” MSU Athletics Director Kyle Williams said. “She comes to MSU from a junior college region that competes at a very high level. She encourages campus and community relations while building success stories within MSU Softball. MSU Texas welcomes Brittanie Talley.”

MSU established a strong brand on the softball diamond earning NCAA Division II postseason qualification in nine of its first 11 seasons since bring back the sport in 2004. The Mustangs led the nation with 108 wins over two seasons in 2010 and 2011 culminating in two Lone Star Conference titles (2006, 2007) and a national semifinal showing (2011).

“It’s a great school in the Lone Star Conference,” Talley said. It’s a very competitive conference and that gives me the chance to establish roots in D2 and get it going. The school and the history that Midwestern has in itself is enough to attract any coach.”

Talley amassed a 129-75 record (.632) over the past five seasons at Vernon College earning Texoma NexStar Small College Coach of the Year honors after leading the Chaps to a 42-12 mark this spring advancing to the NJCAA regional tournament.

That came on the heels of an incredible run in 2020 as the Chaps rolled out to a 21-1 start before the campaign was halted by the coronavirus pandemic.

She will face a similar task at Midwestern State where the Mustangs have managed one LSC postseason appearance since 2015 and produced one winning season over the last five years.

Talley believes the ingredients remain to restore the program’s history of success.

“The facilities are awesome and with the administration on board and wanting to win, that makes a big difference,” she said. “The other sports are already successful. That helps a lot, as well, with kids waning to be a Mustang and to be a part of the MSU culture as a whole. There are a lot of majors to pick from, so the academic side is a big sell especially for female athletes. Academics play a huge role in a lot of their picks and where they choose to go. MSU has it covered on all angles. That makes it really attractive for students which makes my job a whole lot easier.”

Prior to Vernon College, Talley played a role in a successful three-year run at Alabama State helping the Lady Hornets to a Southwestern Athletic Conference (SWAC) title and a trip to NCAA Division I regionals in 2016.

Talley competed professionally for the Skovde Saints winning a Swedish championship as the league’s pitcher of the year in 2011. While in Sweden, she served as the pitching coach for the Swedish National Team in the European Championships calling pitches and working with hitters.

Talley graduated with a Bachelor of Science degree in health, physical education and recreation from JSU in 2010 before starting her coaching career as a graduate assistant at Southern Arkansas.