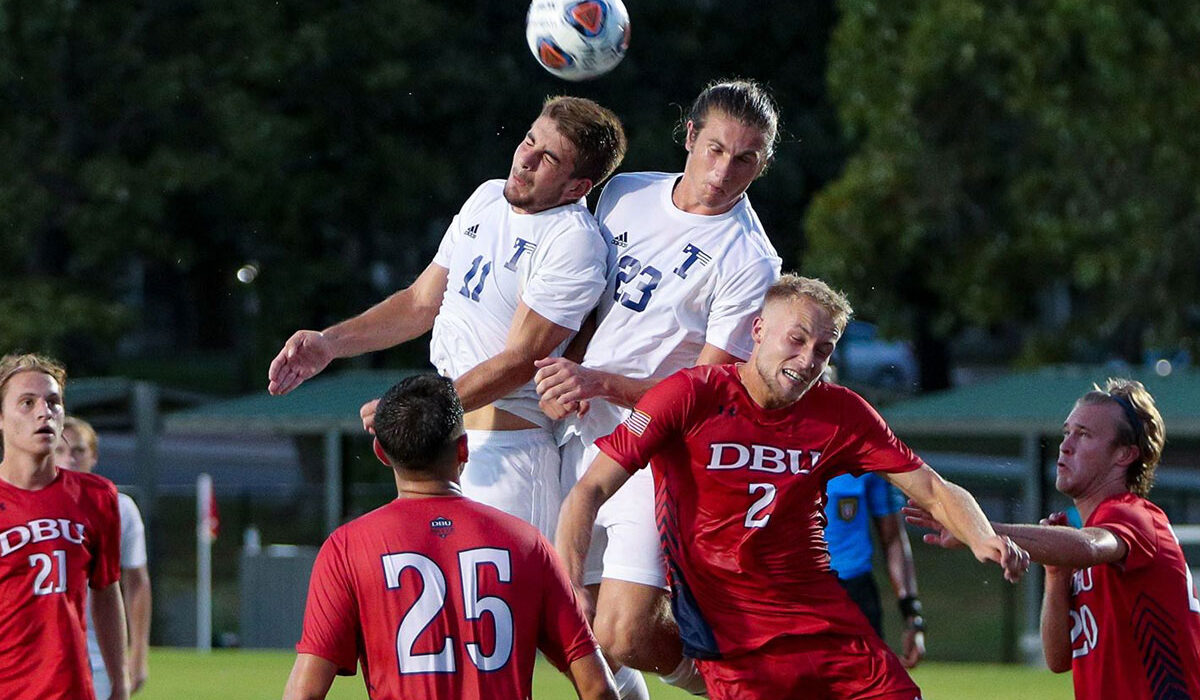 TYLER, Texas – UT Tyler continues to remain unbeaten on the 2021 schedule with a 1-0 victory over DBU. In a defensive battle, it was a goal off the right foot of sophomore Jack Simonini that decided the game.

The goal from Simonini stands as his first collegiate goal, and converted a wild offensive string of events for the Patriots into what would end up being the deciding goal. Sergio Sola sent out a good pass to a streaking Birkir Eydal, whol then sent a pass soaring into the box where Shane Popieluch connected with a rocket of a header that hit the right post. The deflection landed right at the feet of Simonini, who slotted it to the back of the net on the left side.

The Patriots seized control of the match following the goal from Simonini, until a late charge from DBU right before the half evened up the shot count going into the halftime break.

With a shot count of 6-to-6 and momentum firmly against the Patriots, DBU pressed forward into the second half. DBU created numerous opportunities on offense while their defense played flawlessly to begin the half.

It wasn’t until a fantastic save by junior keeper Mathias Eriksen that flipped the momentum back in UT Tyler’s favor. The save by Eriksen was his final one of the match, and it kept a clean sheet for the Patriots.

Eriksen’s saved seemed to give the Patriots life and turned the momentum of the game back into the hands of UT Tyler. It would stay there with a strong defensive effort that only allowed one more shot attempt by DBU.

The offense rebounded quickly, and took a combined eight shots following the diving Mathias save to stop a header from DBU in the 54thminute. This took the pressure right off of the defense, and allowed the Patriots to tire out DBU down the stretch.

The Patriots continue to have a strong offense through the first three games of the 2021 season. In tonight’s match they took a combined 15 shots with six of those going on goal. Michael Agyeman led the way with four shots, while eight other Patriots registered a shot on goal.

UT Tyler will have a quick turnaround as they head out on the road for a pair of tough road games. On Saturday, Sept. 18th they will take on #17 ranked Rogers State. Following that match-up the Patriots will play again next Wednesday Sept. 22nd against St. Mary’s.