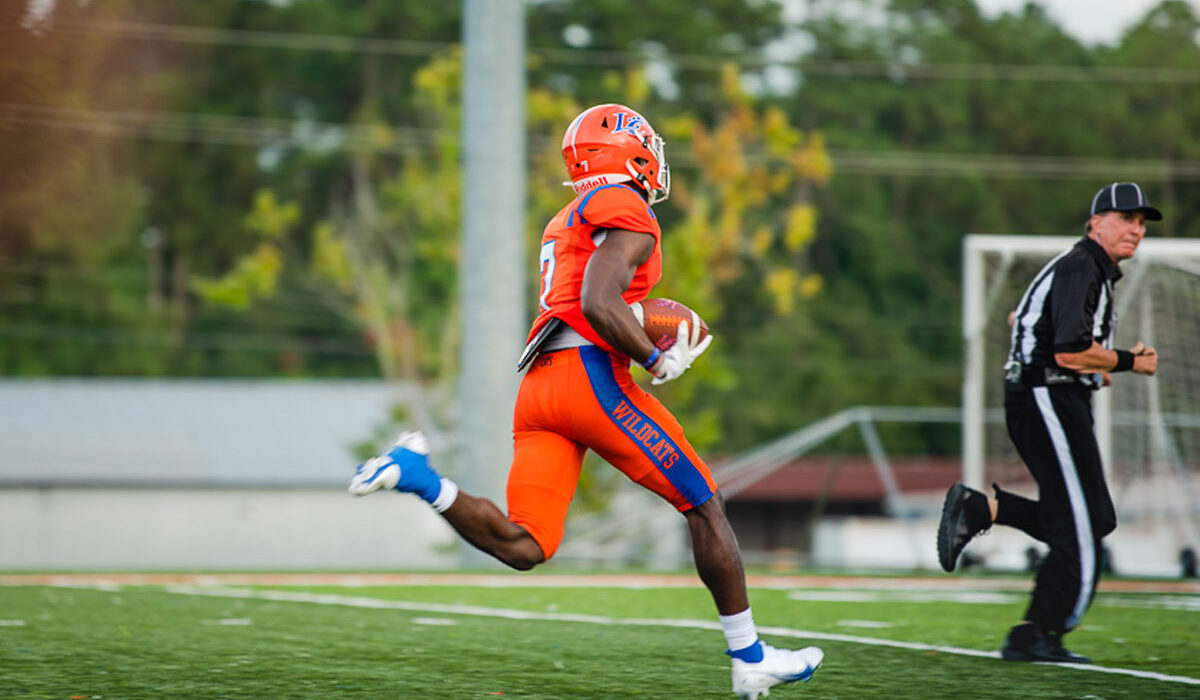 PINEVILLE, La. – The Louisiana College football team had fought back from a 34-7 deficit to take the lead, but after North American University took a late lead the weather dealt a blow to LC’s biggest offensive weapon and the Wildcats dropped its first game as a NAIA member 42-41 to the Stallions Saturday evening at Wildcat Field.

After the two teams traded turnovers to start the game, Louisiana College jumped out first, taking advantage of good field position near midfield after Cole Jones picked off the NAU QB on fourth down. Four plays later, Sal Palermo III passed out to Devin Briscoe out on the edge who raced 30 yards for the game’s opening score, putting LC up 7-0.

But that was almost all of the offense the Wildcats could find in the opening half as the Stallions scored 34 straight points, taking a 14-7 lead into the second quarter and then busting that advantage open to 34-7 with just 32 seconds before halftime.

However, one play seemed to turn the game on its head as Palermo found Zion Williams down the left sideline for a 60-yard gain to the one yard line. On the very next play, Devin Briscoe busted through the line to give LC some momentum heading into the half, even while trailing 34-14.

The momentum started at the end of the first half propelled LC into a big third quarter that completely changed the game. After a quick NAU three-and-out and a shanked punt set up LC in Stallion territory, the Wildcats needed just four plays to traverse 72 yards with Palermo finding Micah Dunn for the final eight of them to cut the deficit down to 34-21.

LC’s momentum grew further on NAU’s next offensive possession as the Wildcat D stuffed the Stallion quarterback on a fourth and one run attempt to turn the ball over on downs at the LC 34. On the very next play, Palermo found Dunn streaking behind the NAU D for a 66 yard pass and catch to make it a one-score game.

The Wildcats were set up with great field position again as a bad snap on a punt following a three-and-out allowing LC to start at the NAU 19. This time, though, a penalty hurt the flow and LC was held to a 32-yard Hunter Martensson field goal that made it 34-31 NAU.

After another Stallion punt, LC moved more methodically down the field, using 11 plays and four minutes to go 56 yards, including a pair of third and long conversions to Dunn and Canaan Leon. This drive ended with LC getting out the big hole that had been dug and when Briscoe powered in for his second two-yard touchdown of the game, LC was back on top at 38-34.

LC even extended the lead to start the fourth quarter. After another fourth down stop by the defense, the Wildcats again went methodical, using ten plays and taking up nearly four more minutes off the clock before a holding penalty slowed the operation and Martensson had to place through a 27-yard field goal to make the score 41-34 Wildcats.

But after getting a second chance thanks to a penalty that extended the drive following a failed third and long play, the Stallions for the rhythm that would push NAU back on top. The Stallions took the new life and marched down the field, and a 34-yard touchdown pass combined with a successful two-point conversion put NAU up 42-41.

And that’s the point where an outer band of Hurricane Ida showed up, dumping rain on the Wildcats just as the passing offense that had gotten so prolific since right before halftime took the field. And the rain played a role on several key misses on pass plays during the last eight minutes of the contest, including several incompletions, an interception on an underthrown ball, and the play that locked up the result, a muffed punt with 30 seconds remaining in the contest.

With the running game struggling, Sal Palermo III took on the mantle to get the team back in the game. He went 24 of 47 for 402 yards, three touchdowns and one interception. His favorite target was Micah Dunn, who had five catches for 121 yards and two scores, including on the 66-yard play. Zion Williams had three catches for 109 yards, including the 60-yard catch and run that turned the game right before halftime. While only gaining 17 yards on the ground, Devin Briscoe had 51 receiving yards and a touchdown through the air as well.

Defensively, the Wildcats were led by Cole Jones & D’Mario Weathersby, who each had seven tackles in the contest while Jones also had the interception.

The Wildcats (0-1, 0-0 SAC) hope going into Sooner Athletic Conference play for the first time will lead to their first win of the season when Southwestern Assemblies of God comes in on Saturday for the conference opener for both teams. Kickoff against the SAGU Lions (0-0, 0-0 SAC) is set for 6:00 P.M. at Wildcat Field.